Jean Henri Fabre is a famous French entomologist. Although he came from a poor and impoverished background, he became a teacher and later he was well-known for his studies and research on insects and arachnids. Fabre was not a dry, clinical scientist. His writings on his observations are poetic masterpieces of literature. ( Perhaps Fabre’s most famous experiments is known as the Pine Processionary. The Pine caterpillars formed a continuous loop around the edge of a pot that held their food. As each caterpillar instinctively followed the silken trail of the caterpillars in front of it, the group moved around in a circle for seven days without deviation, in spite of  starvation. This showed the power of instinct in the creatures; there was no power of reason.) Fabre was precise in his observations, a true scientist who observed, recorded and observed again. Many people thought he was a little crazy in his dedication. I’m sure he looked a little silly as he lay on the ground and watched his insects and spiders for hours and days at a time. But he believed that if he was to see how an insect lived, he must  observe the insect in its own habitat.

Observation is the corner-stone of the Montessori Method. It is not an exercise confined to a training year, but the beginning of a fundamental and intrinsic skill that the teacher must continue to develop. It really means that we learn to see the child, not just look at him. Maria Montessori was a doctor and a scientist and when she observed, she looked with an objective eye at phenomena before her. We must learn to do the same sort of  ‘looking’. What good is our science if we don’t know our subject? The subject is the growth and development of the person. Like Jean Henri Fabre, we must learn how ‘sit still ‘ record what we see without bias or preconceived judgments.

On Friday, I completed the second observation week. Last November I went to France and met Laurant Baurdin and his little one-room school in Grasse. This time I was able to stay in Bergamo and spend each day in the British Bilingual School.  It isn’t a Montessori School, strictly speaking, but the Elementary teacher is Montessori trained and was kind enough to host me for the week.

The teacher was working under a few restrictions: she had to follow the strict and intense Italian curriculum and she did not have the benefit of a mixed-age classroom. The administration had provided some Montessori materials, although a limited selection. Nonetheless, she worked with a marvelous group of children and did the best she could with what she had.

The teacher wasn’t under observation, however. It was the children I had come to see! I quickly settled on a young lady for no particular or distinctive reason. She just happened to be close to me at 8:30 on Monday morning. Each day I sat on a small stool by the door; I watched and waited and recorded. As the days went by the children showed me, in a marvelous way, how much they could do and carry out under their own initiative. Given a structure, they were set free. These children showed a profound love of learning, of self-discipline and self-motivation. They respected the teacher and helped one another; they were fun and creative and asked for more challenge in math and science. There was no such thing as procrastination.  I could say they were ‘on fire’.

The teacher gave lessons to individual students and small groups. She allowed them to make choices and sometimes she channeled their over-whelming enthusiasm to a realizable goal. She was a guide in the true sense of the word. The Montessori maxim of  ‘follow the child’ was understandable in this classroom because the children’s fire and love of learning brought on more discoveries of the children’s own making.

This natural out-pouring of enthusiasm on the part of the children could only arise from ‘freedom within limits’. Montessori observed this same phenomena and realized that she was looking at the nature of the child, ‘hitherto undiscovered.’ It is not a blind humanism that everything good is accomplished with the least intervention. I could see that the children were given structure: freedom and responsibility in balance according to their maturity. Human nature is still weak and fallen and in need of God. Who knows this more than child who has reached the age of reason?

I could see that these children were capable of doing more with their knowledge and freedom. What a joyful sight! Can you imagine having this experience as a child? I think that as an adult you would understand that the world is an interesting place, full of wonders and adventures. More than that, there would be a deep sense of confidence that those adventures could be lived because, once upon a time not very long ago, someone gave you the freedom to live your dreams and to succeed.

This is a wonderful reflection for teachers but applies to all walks of life as well! Thank you for this kind and gentle reminder about what is most important in our work.

Pursuit of a Joyful Life

Dear Young Teacher Down the Hall,

I saw you as you rushed passed me in the lunch room. Urgent. In a hurry to catch a bite before the final bell would ring calling all the students back inside. I noticed that your eyes showed tension. There were faint creases in your forehead. And I asked you how your day was going and you sighed.

But I knew it was anything but fine. I noticed that the stress was getting to you. I could tell that the pressure was rising. And I looked at you and made an intentional decision to stop you right then and there. To ask you how things were really going. Was it that I saw in you a glimpse of myself that made me take the moment?

You told me how busy you were, how much there was to do…

It’s time to go observing again! Last November I went to France and this time around I’m in Italy at a little school near Bergamo. It’s a lovely place! It’s a bilingual school (which means I speak Italian)and although it’s not strictly a Montessori School, the teacher is amazing because she has built up the materials and tools for beautiful environment. She has the blessing of the headmaster and the neighboring teachers.

It shows that Montessori is more than a name. It’s a way of life! There is more to say but that will come after another day.

After studying angles and classifying figures, we come back to sorting triangles. I built them according to angle (first row) and then according to length of the sides(second row).
Although I did not describe it in detail, building in this way reflects how we began to study the angles and lines. We’ve discovered that the first figure (polygon) that we can build with the sticks is the triangle.
But how many kinds of triangles are there? What are the relationships between lengths of the side? That is what we are setting out to discover….We come up with these six. 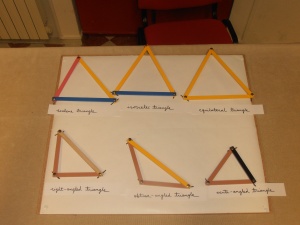 But what about a right-angled scalene triangle? This comes with a story!
(Everything in early Elementary comes with a story.)
This string is like the strings of the ancient Egyptian surveyors. They were interested in making right angles so they could build pyramids and mark out plots of land, especially after the Nile flooded the farm land. They found that they could be very sure of a right angle if they had this special sort of triangle, easily measured by rope: three knots on one side, four on the other, and five across.
All we say now is ‘Hmmm!’ The children are ready for more adventures, but let’s not spoil the surprise! 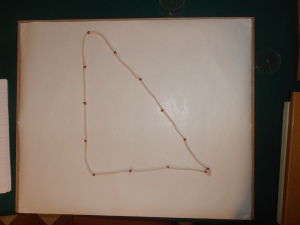 There is still more to discover: here, finding the height of a triangle. Even though we’re measuring against an acute scalene, what would happen if we measured the others in the same way? What will we see with the obtuse triangles? (For example!)

Working with curved and linear figures: 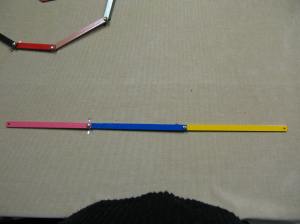 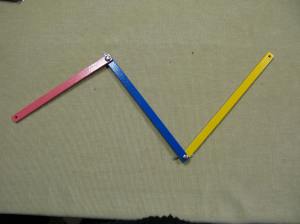 And then, finally, a grand classification between convex curved figures, concave curved figures, and crossed curved figures. All curves are on the left.
On the right, are various forms of polygons: convex, concave, and crossed.
The shapes underneath are geometry figures from the Cabinet of Shapes. The children would already know the names of these (from the Children’s House at about the age of four) but now, after all this practice and exploration, they are ready to classify plane figures!

No, really, it makes me dance with delight! How fun it this? And there is more!

We’ve come back to Geometry! It’s been a few long months since we started this subject and now we’re playing catching up….

Plane Geometry is fascinating at any stage, but in Montessori it seems pure fun. Below are pictures from my practice time. The key to these lessons is a material called “Geometry Sticks.” There are ten sets of each color and each a different length. Each stick has a hole in either end which allows for exploration. One end can be pinned down while the other end can be joined with another stick. This allows us to talk about lines in a “hands on way”: rays, line segments, point,common points of origin, etc. It also allows for making circle easily and, more importantly, for making angles! Of course, it’s a primitive study in this stage. But its an amazing start to plane geometry with little ones.

Both angles seen at the same time: concave and reflex angles. 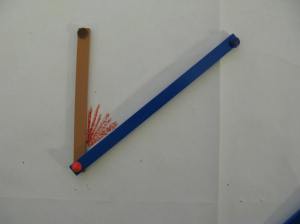 In this instance, I was practicing angles: acute angle and obtuse angles seen here, along with vertically opposite angles. 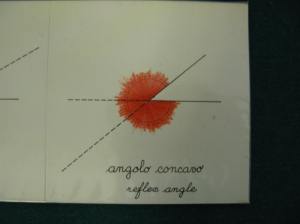 Classified Nomenclature cards. An important step and follow-up to experiences and names of new things. There are nomenclature cards for just about everything in the Elementary classroom!
As a point of interest, these particular cards are ancient…

Then we see that they share an adjacent side. We remove it and set it to the side.